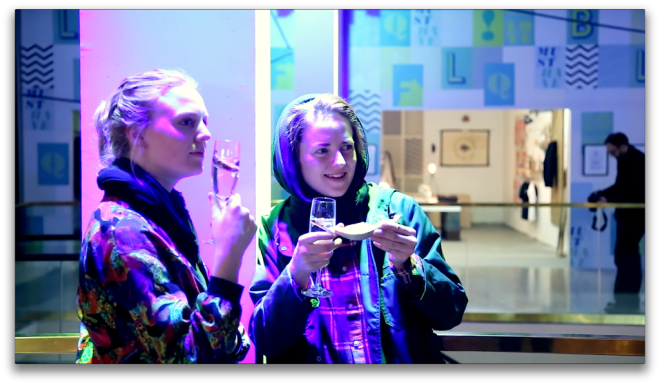 We walked from the main part of the shopping centre, to the Pop Up Village.  We passed clean, orderly stores – shoe retailers, a lingerie shop, a café.  Throbbing deep house music gradually replaced the ambient jazz.  Crossing the threshold into the village, everything changed.

A store with a giant boom box painted and objects made from retired jeans.  Another space had a pastoral forest on the wall, an old leather couch, and a phonograph playing.  I looked back at the mall behind, and felt I stumbled on something creative.  Truly special and unique…”

Boulevard Berlin
In April 2014, We Are Pop Up launched The Pop Up Village at Boulevard Berlin, in Germany.  Boulevard Berlin sits in a pre-war building in the upscale Stieglitz neighbourhood.  The name comes from a public thoroughfare through the shopping centre that connects Schloßstraße with Harry Bresslau Park.

Corio – the owner of shopping centre – is one of Europe’s most forward-thinking property groups. Gerard Groener saw early on that the European retail leasing market demands new thinking.  Consumer incomes remain under pressure, and brick-and-mortar retailers suffer from the explosive growth in online retail.

From London with love
Working with Corio, the We Are Pop Up team developed the concept From London With Love.  Eight independent British fashion retailers coming to Berlin, trading for a few months in one of Berlin’s busiest districts.  For the retailers, From London With Love represented the opportunity for British entrepreneurs and SMEs to test continental Europe’s hottest retail market.

When we started We Are Pop Up, it was difficult for London-based small businesses to find short-term prime retail property in London.  Foreign geographies were unthinkable.  Now, there are over 1,000 short-term retail spaces available in London, and our brands are traveling to Berlin.

The world is flatter
Ten years ago, Thomas Friedman wrote The World Is Flat – a sweeping overview of globalisation.

“In a flat world, where value is increasingly created, and complex problems solved, by whom you connect with.”

In the decade since, software platforms emerged, directly connecting people to create new opportunities in specific sectors. Thanks to AirBNB, the self-catering holiday market now rivals multinational hotel chains.  Kickstarter has channelled $1B in funding to independent creative producers.  In the last year alone, the price of a BitCoin has increased 10% month-on-month. Furthermore, thousands of other platforms – across every sector – chew away at structural inefficiencies and archaic processes.

The rise of lean retail
In January 2012, Dr. Alastair Moore and I sat in the Crown pub on Monmouth Street, discussing what an AirBNB for retail property would look like.  The idea gave millions of brands and entrepreneurs the opportunity to experiment with prime retail spaces, from High Streets to shopping centres. At the time, empty shops dotted every London neighbourhood.  Old retailers like Jessops fell, and nothing new rose in their place.

Then, Homeslice’s food truck turned into a Neal’s Yard restaurant.  Fashion boutique Wandering Minds started with six weeks in BOXPARK Shoreditch, and now has three stores – two in London and one in Berlin.

Independent brands renew the shopping centre
From London With Love launched on a Thursday evening.  Moore and I leaned over a railing and toasted champagne.  Through We Are Pop Up, eight independent British brands launched shops in an upscale Berlin shopping centre.

Moore looked around, surveying the village.  Compared with the other shops in the centre, our retailers had an artisan quality.  Murals painted on walls.  Vintage furniture.  Products not found anywhere else in Berlin.

“Now this is cool,” Moore said.